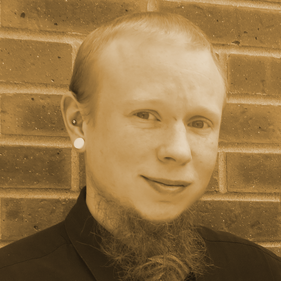 Anthony Lukas Redgrave is a writer of interactive fiction. He is a graduate of Full Sail University with a BFA in Creative Writing for Entertainment.  As soon as he could read and write, he began playing interactive fiction games on a VIC20.  Later on, he dabbled in BASIC programming and design his own small scale facsimiles of the game style. More recently, he has worked on an alternate reality game, and an interactive fiction chat bot.  One of his interests is developing concepts for gamifying language learning via interactive fiction.  Storytelling is his strength, and teaching through play is his passion.

Anthony believes in the tradition of the storyteller as a guide who tricks people into learning.  He connects ancient storytelling methods to modern interactive storytelling so that people can feel ownership of the old stories again. His skills in world-building come from his combined interests in linguistics and history along with a background in comic art. He is fascinated by invented languages such as Esperanto, as well as Danish, Japanese, German, Portuguese, French, and Old Norse.

His latest project nearing completion is The Nightingalien, a sci-fi children's book adaptation of the fairy tale The Nightingale by Hans Christian Andersen. In addition to writing, Anthony is an artist with a variety of talents including independent graphic novels, local advertisement, graphic design for shirts and posters, and historical and fantasy costume design.  When he is not engaged in storytelling or learning, Anthony enjoys allowing his ancestors to tell him their stories through family history research.  He also spends a lot of time with his teenage stepson, who is learning to craft his own stories and games.

Cowboys & Peacocks is the online portfolio of Anthony Lukas Redgrave.  It exists as a place for others to enjoy his work, and for professionals to view samples and consider adding Anthony's talent to their projects.  All content on this site is the property of Anthony Lukas Redgrave unless otherwise stated.  No part of this site may be reproduced or edited without express permission from the creator.